Waqar Ahmed Seth (born 16 March 1961) is a Pakistani jurist who has been the Chief Justice of Peshawar High Court since 28 June 2018. 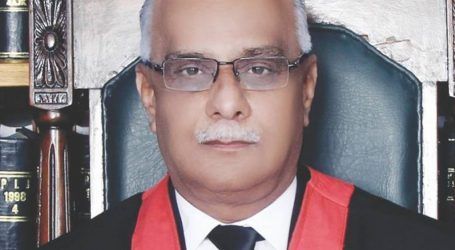 He got Higher Secondary School Certificate from the FG Inter College for Boys in 1977 and a Bachelor of Science degree from Islamia College, Peshawar in 1981.

Seth started his professional career in December 1985 when he was enrolled as an advocate in the lower courts.

His judicial career started on August 2, 2011, when he was elevated to the Peshawar High Court as an additional judge. He has also remained a banking judge, company judge and a member of subordinate Judiciary Service Tribunal, Peshawar.

On 28 June 2018, he was appointed Chief Justice of Peshawar High Court.

He was inducted into the special court hearing high treason case against Pervez Musharraf in October 2019 as the president of the court.

On 17 December 2019, the three-member bench of this special court awarded death sentence to Musharraf in a short order. This short order was criticized by Director General of Inter-Services Public Relations of Pakistan military, General Asif Ghafoor. Ghafoor said in his statement that "there was pain and anguish among the rank and file of military" due to this punishment and that Musharraf cannot be a traitor since he served his country for 40 years and fought wars for its defense. Later, the short order was criticized by government ministers associated with Pakistan Tehreek-e-Insaf, most prominently by Firdous Ashiq Awan and attorney general Anwar Mansoor Khan.

The special court issued a 169-page long detailed order on 19 December 2019. He was widely criticized by government ministers and legislators associated with Pakistan Tehreek-e-Insaf for his opinionated note about giving an exemplary punishment to Musharraf. Seth wrote in paragraph 66 of the judgement that law enforcement agencies of Pakistan should arrest and hang Musharraf till death and if somehow he is able to evade this punishment and dies before the punishment then his body should be dragged and hanged for three days in D-Chowk of Islamabad in front of the Parliament building. The reasons he gave for this posthumous punishment was Musharraf's persistent and stubborn delaying tactics to avoid facing the court and ultimately the punishment. The judge also directed to bring all those to justice who was responsible to help Musharraf flee from the country.

After the judgement, the Director General of Inter-Services Public Relations, General Asif Ghafoor issued veiled threats aimed at the judges who decided to punish Musharraf suggesting that they are enemy of the country and Pakistan Military knows how to defend its honour and dignity. After which three ministers belonging to Pakistan Tehreek-e-Insaf Government appeared in a press conference and announced that government have decided to file a reference against Seth in Supreme Judicial Council for his removal from judiciary.

@Veer I hate this guy with a passion

Falak said:
I hate this guy with a passion
Click to expand...

hahahahaha...can you believe i did'nt look at his pic....

Short Biography Of Plato By Ikhlaq Ahmed In Urdu
2