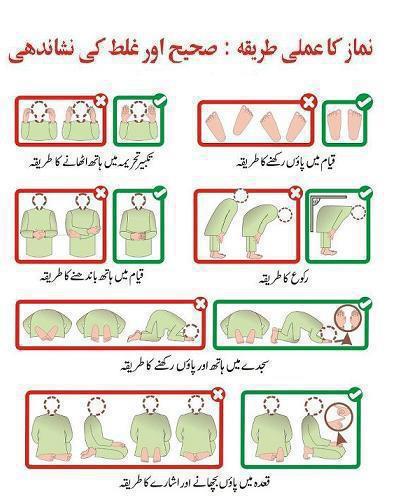 DIFFERENCES BETWEEN MEN’S AND WOMEN’S PRAYER

1.Concealing the body (Satr-e-Aurat) – that is to conceal/cover the necessary parts of the body. For men, this consists of the body between the navel up to and including the knees. For women this consists of the entire body, except the face, hands and soles of the feet. Women must hide their faces from strangers whilst not in Prayers. Wearing clothes that are so thin that body colour is exposed will make the Prayer void. Similar is the case of the head scarf if the shine of hair is revealed. In fact, wearing such clothes is prohibited even outside Prayer. Before beginning Prayer the woman should make sure that (other than her face, palms and the soles of her feet) her entire body is properly covered with opaque clothes. If she offers Prayer in thin clothes which reveal the colour of the skin or the shine of her hair, it will render the Prayer void. It is obligatory to also hide the neck, ears, hair-locks hanging from the head, and the wrists.
2. If any part of the body (other than her face, palms and the soles of her feet) is exposed up to one fourth of its area, and she proclaims the “Takbeer Tahreemah” (“Allahu Akbar”) without hiding it, then the Prayer will be deemed to have not started at all. If one fourth or more of it gets exposed during the Prayer for a time in which "Subhaan-Allah" can be recited thrice, it will render the Prayer void.
3. While saying “Takbeer Tahreemah” (Allahu Akbar) a woman should raise her hands only up to her shoulders (and not up to the ears) and should not take them out of her cloak.
4. In the Qiyaam (standing position), she should place her left palm on the middle of her chest and the right palm over the left.
5. While bowing, she should only bow a little, enough for her hands to touch her knees, without holding them. The fingers should be kept straight. She should stand with her knees slightly bent, and her arms close to her body.
6. She should perform the prostration with her body drawn together i.e. she should keep the abdomen joined with the thighs, the thighs with the calves, the shins with the ground, the arms to the sides and the wrists spread on the ground. Further, instead of keeping the feet upright, both feet should be spread out towards the right.
7. While in Qaadah (sitting position), instead of keeping the right foot upright, both feet should be slid out towards the right, with her sitting on the left foot.
8. For women, praying in a room is better than praying out in the courtyard, and praying in a basement is better than praying in a room. (Abu Dawood). Mastermind