Chairman Ruet-i-Hilal Committee Mufti Muneeb-ur-Rehman announced that the moon for the month of Shawwal was not sighted on Thursday, and that Eidul Fitr will be celebrated across Pakistan on Saturday. 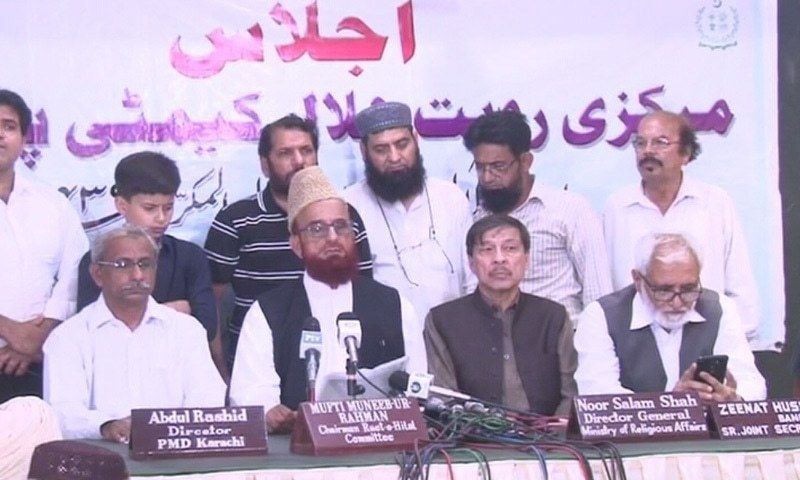 Since the crescent moon which marks the new lunar month was not sighted today, Friday will be the 30th and final day of Ramazan.

The announcement was made by Mufti Muneeb after chairing a meeting of the Central Ruet-i-Hilal Committee. He said evidences of moon-sighting were not received from anywhere in the country.

The Central Ruet-i-Hilal Committee had convened the meeting to sight the moon for Eidul Fitr in Karachi, whereas zonal bodies of the committee also met in Islamabad, Quetta, Peshawar and Lahore.

The Shawwal moon has been sighted in several other countries, including Saudi Arabia, United Arab Emirates, Indonesia and Oman, where the first day of Eid will fall on Friday. India, where the crescent was not sighted, will celebrate Eid on Saturday as well.

In what has become an annual custom, many residents of Khyber Pakhtunkhwa and recently-merged Fata will celebrate Eid on Friday after an unofficial moon-sighting committee in Peshawar headed by Mufti Shahabuddin Popalzai announced that the moon has been sighted in various parts of the province.

Every year, the controversial moon-sighting committee led by its self-appointed head holds its meeting at the Masjid Qasim Ali Khan in Peshawar on 29th Ramazan welcoming witnesses from all over the province.

This year too, the committee claimed to have received 45 evidences from across the province and announced Eid on Friday after verification.

A large number of people from different parts of the city were present at the mosque for the announcement.

"We have received 45 evidences, including 10 from women," Mufti Popalzai said while speaking to reporters.

Eidul Fitr celebrations mark the culmination of the Holy month of Ramazan during which Muslims all over the world observe 30 days of fasting.

In Pakistan, Eid festivities are marked by last-minute late night shopping with shopping malls and markets bursting at the seams with energetic crowds.

The government has announced a four-day holiday for Eid this year, which will run from June 15 to June 18 (Friday, Saturday, Sunday and Monday).

Yesterday at 2:30 AM
Saad Sheikh