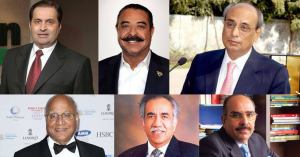 1. Shahid Khan.
Net Worth: $7.4 Billion
Date Of Birth: July 18, 1950.
Currently with the recent update to his net worth to $7.4 Billion Shahid Khan a pakistan born American is the richest or perhaps the wealthiest man in Pakistan.
He is the owner of the Flex N Gate manufacturer of automobile parts in Urbana and also have holdings in the NFL team Jacksonville Jaguars and the Fulham Soccer club in the Football Champion League this man is a business tycoon.

2. Anwar Pervez
Net Worth: $4 Billion
Date Of Birth: 1935
He is the founder and chairman of Bestway and a Pakistan born british.
He is involved in different business like Wholesale retailer (Cash & Carry), Cement and Banking.

3. Mian Muhammad Mansha
Net Worth: $3.6 billion
Date Of Birth: 1947
He is the founder and CEO of the Lahore-based international conglomerate Nishat Group.
He is in business like financial institutions (MCB and Adamjee Group), textile, Cement (D G Khan) and aviation.

4. Asif Ali Zardari
Net Worth: $1.9 Billion
Date Of Birth: 26 July 1955
He served as the 11th President of Pakistan from 2008 to 2013, the first president born after Partition.He is member of National Assembly of Pakistan since August 2018.
He is married to the Benazir Bhutto who is the former Prime Minister of Pakistan and has been died in terrorist attack in 2007.

Congrats internationalmedia on a new trophy: A Poster Is Born

Yesterday at 10:16 AM
internationalmedia
I

Sunday at 3:10 AM
sahrish khan